How to become a producer? After participating in CinemAsia’s FilmLAB workshop for scriptwriting, Priscilla Rasyid wants to learn everything about producing. She decides to combine a holiday in Jakarta with a film producing workshop.

It has been over a year since I finished CinemAsia’s FilmLAB workshops for scriptwriting and documentary. I have never had a formal film education nor do I have a lot of experience in film at all. After my student film which is part of my MSc Anthropology programme I found out that there is more to film than I had previously known. Armed with knowledge and a base after FilmLAB I set out to learn more and grasp knowledge from wherever I can.

I had booked my vacation to Indonesia, Jakarta, where my family lives. I would stay there from December till halfway January. After I had booked my flight my friend from Jakarta told me “I’m joining a producer workshop in Jakarta, Kemang area. A really cool producer will give the workshop in January!” Coincidence? Maybe, but I decided that this was meant to be. Though my Indonesian is good, it was no way near perfect, but I wanted to give it a shot anyway. 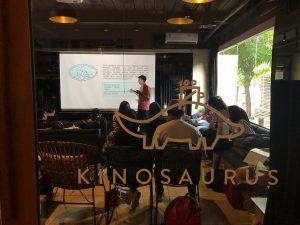 Enter Kinosaurus
The Producing workshop is one of the three workshops from the Cinema Crash Course (C.C.C.), the others are directing and scriptwriting. I chose producing because it exactly matched with what I want to be more skilled in and matched my vacation period in Jakarta. It was the first time for me to visit a local cinema, named Kinosaurus. The cinema I usually visit is called Cinema XXI, a cinema giant which is located all over Indonesia and mainly screens major productions with high profiled actors, actresses, directors and writers. Kinosaurus is different. It is small, cozy and definitely most of the cool kids hang out there. 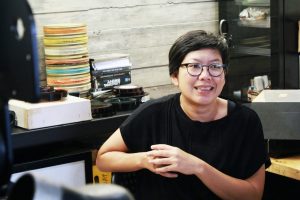 Meiske Taurisia
The workshop was given by Meiske Taurisia, a producer of Palari Films who was in charge of films such as Posesif (2017) and Aruna & lidahnya (2018) from director Edwin.

From the beginning she made clear that this workshop is for students and young professionals, for people who know a bit about cinema and film, and those who know nothing at all.

I felt that this was a good base for me to understand more about Indonesian film production and cinema, because all I know is mainstream Indonesian cinema while there is so much more to this diverse country that I also call my home.

The first weekend was focused on getting to know the film industry and the process of making a film better. Meiske showed a basic map of how film production works. This part was already quite familiar to me but what really got my attention was the experiences Meiske shared with us on how she started producing films at the age of 33 and what actions she took to make the best possible films.

Adapt well
Meiske’s first advice was ‘know what you are making’. A person would never go to a bakery for a piece of satay, but maybe that person wants to go to food court where there is both cake and satey. After setting the goal, the strategy needs to adapt to this. Secondly, you also need to adapt to the people you are working with, either a partner or investor. Meiske shared with us a story when she was visiting Europe for a film festival.

A French producer wanted to work with her but she did not feel the right connection with him. As she spoke to him after she had declined his offer, his polite demeanor had changed. “I cannot imagine that I would had to work with this guy for another five years or so. Vibes don’t lie.”

Nothing in this world is for free
The third advice was: if there is no way, then you will make a way. Meiske has always treated her investors as equals and not as superiors who fund the films. For one film where the budget was low, Meiske had a meeting with one investor from whom she could borrow equipment. “He was very kind and really wanted to help us. But he told me this one thing: nothing in this world is for free. I will give you a deal. You can borrow my equipment but you will pay me back when the film is making money, bit by bit.” And so she did. 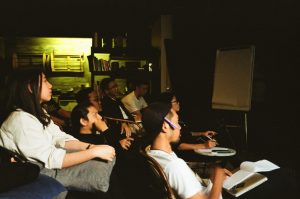 Participants and Meiske (sitting in front) watching a pitch

I had always felt that most Indonesian films seem to be too similar to each other these days, but after watching the pitches of the other participants I realized that there is so much more than only the mainstream Indonesian films.

One participant showed a very funny stop-motion film to pitch his film idea. Another participant showed his film about the friendship between dog and human. I cannot wait for my next vacation in Jakarta, because maybe by then I might see one of their films on the silver screen.