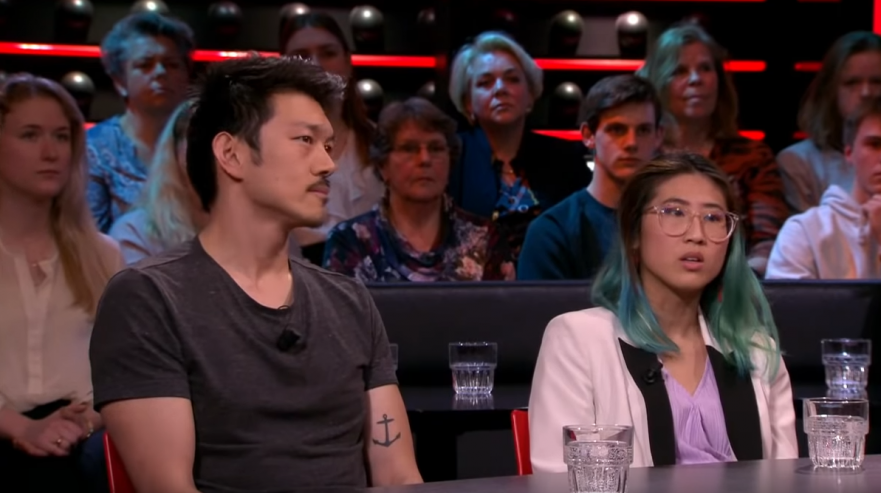 It has already been in the air for some time and now it seems to have reached a fever pitch. This generation of Asian Dutch does not seem to tolerate the daily dose of racism aimed at them. This past week daily racist jokes reached a more blatant level with the spread of the Coronavirus and some white Dutch showing their ignorance by connecting potential contagion to anyone with an Asian skintone. In many cases Asian Dutch, who have been nowhere near the Wuhan region during the outbreak, were at the receiving end of these comments, looks and posturing. Some cases went as far as writing down ‘Sterf Chinezen’ in public spaces or making a ridiculously offensive carnaval song.

This in turn was the boiling point for a few Asian Dutch who have already adressed the largely underlying discrimination. Luckily enough media has been deciding to grant them more attention this time around. This meant that artist Sioejeng Tsao, journalist & author Pete Wu and student Rui Jun Luong were invited to discuss the issue on Dutch Talkshow De Wereld Draait Door

Youtuber Hanwe was interviewed by the Dutch youth news. Pete Wu wrote a guest column for the Volkskracht to vent his frustration. Student Vincent Yeers and head of PAC Hui-Hui Pan started a petition Wij zijn geen virussen and appeared on the Saturday newspaper of Dutch newspaper AD. Hui-Hui Pan and Pete Wu were interviewed for Dutch actuality show EenVandaag.  CinemAsia has also released a public statement on the issue and managing director Shiko Boxman was interviews by AT5.

All in all it seems as if the issue is finally surfacing and is asking white Dutch to reflect on some of their habits, assumptions and privilege. Even if the intention is not meant to be racist, this does not mean it isn’t. It’s also not necessarily about an individual incident but the combined weight of all different instances of discrimination, racism or exclusion. We hope the verbalisation by all these people will contribute to more understanding and empathy and to move the needle on this issue.

What do you think? Do you think this extra exposure and attention will help this issue? Have you been affected by any racism concerning the Coronavirus?